The viral claim turned out to be fake in the investigation of Vishvas News. Actually this picture is of pop star Britney Spears. 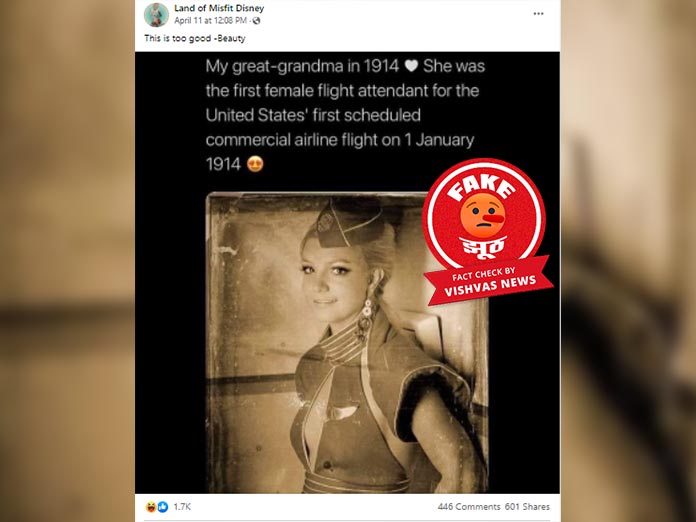 New Delhi (Vishvas News). A picture of a girl dressed as a flight attendant is going viral on various social media platforms. The viral image is being shared with the claim that it is the first female flight attendant of a commercial airline in the United States of America, captured in 1914. Vishvas News in its investigation found that this claim is false. Actually this picture is of pop star Britney Spears.

Facebook user ‘Land of Misfit Disney’ shared the viral post on April 11. The caption with the picture read, “My great-grandmother in 1914, she was the first female flight attendant for the first commercial airline of the United States of America on January 1, 1914.” (Archive)

Vishvas News used Google reverse image tool to find out the veracity of the viral image. We found this picture on IMDb’s website. But this picture was not black and white but colored. According to the information given with the picture, it was pop star Britney Spears. This picture is from Britney Spears’ 2004 music video ‘Toxic’.

The entire music video can be viewed by clicking here.

We spoke to Dainik Jagran’s Entertainment Correspondent Smita Srivastava about this. She also confirmed that the picture is of Britney Spears.

Upon searching, we learned that the first commercial flight attendant was Ellen Church, and she became the first woman to do so on May 5, 1930.

According to ajc.com ‘Ellen Church, the first female flight attendant to ever fly, made history on May 15, 1930, when she embarked on a Boeing Air Transport, 20-hour flight from Oakland to Chicago.’

At the end of the investigation, Vishvas News checked the Facebook profile of the user who shared the viral picture. Social scanning revealed that the Facebook page ‘Land of Misfit Disney’ has 32K followers.

Conclusion: The viral claim turned out to be fake in the investigation of Vishvas News. Actually this picture is of pop star Britney Spears.