Fact Check: No, this is not the image of an Indian Soldier

Man appearing in the viral image is Daniel Schetter who is a Winter Surfer from America, not an Indian Soldier. 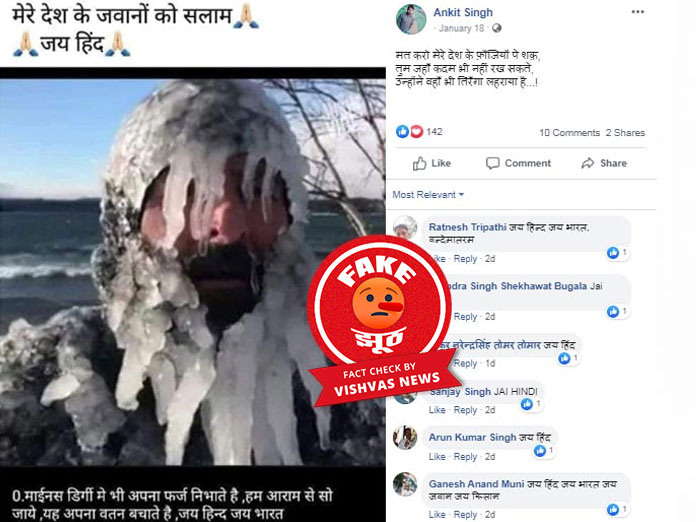 New Delhi (Vishvas Team). A viral post on social media shows an image of a man with his face covered with ice. The photo is accompanied by a caption claiming that the man shown in the picture is an Indian Soldier.

Vishvas News investigated and found that the claim is false. Man appearing in the viral image is Daniel Schetter who is a Winter Surfer from America, not an Indian Soldier.

A viral post on social media shows an image of a man with his face covered with ice. The photo is accompanied by a caption in Hindi that reads: “मत करो मेरे देश के ‪फ़ौजियों‬ पे ‪शक़‬, तुम जहाँ ‪कदम‬ भी नहीं रख सकते, उन्होंने वहाँ भी ‪‎तिरँगा लहराया‬ है…!” (Do not doubt our soldiers, where you cannot even step, they have unfurled the tri-colored flag). You can check the archive link of the post here.

We started our investigation by cropping the image and searching it through the Google Reverse Image tool. The Reverse image search result took us to Youtube video uploaded on 25 December 2017. The headline written with this video was: Jerryism #53 12.25.17 Christmas Day Presque Isle Surfing. We can see the viral image guy in the video exactly in the viral look.

After watching the video, it is proved that the viral image had been taken from this video. Here’s the archive link of the Youtube video.

This video had been shared by a channel named “Jerry Mills” and the video description read: Today’s Jerryism brings you each a Happy Holidays and Merry Christmas greeting from a VERY COLD and windy Lake Superior at Presque Isle Park in Marquette, MI. I thought I was cold until I chatted with Daniel Schetter, one of our local winter surfers (You’ll LOVE his beard!) I even ran into our local running Santa, Bill Sved. Enjoy!

As per the description, the man appearing in the video is Winter surfer Daniel Schetter.

Now we started looking for information about Daniel Schetter by Google Search. We found the Instagram account of Daniel Schetter (upsurferdan). After scanning his account, we found that Daniel is the guy shown in the viral image. We found lot of posts in which his face is covered with ice exactly like in that in the viral Image. For example, you can see his image below:

To get the authentic confirmation regarding the viral post, Vishvas team contacted Daniel Schetter through Facebook. He replied by confirming that his image is going viral with the fake claim. He confirmed that he is not any soldier and he lives in Michigan America. By profession, he is a Winter Surfer.

Many people are sharing this post on social media. One of these is a Facebook user named “Ankit Singh”.

Conclusion: Man appearing in the viral image is Daniel Schetter who is a Winter Surfer from America, not an Indian Soldier.