Vishvas News in its investigation found that this claim is false. The viral picture is not recent, but from 2002. 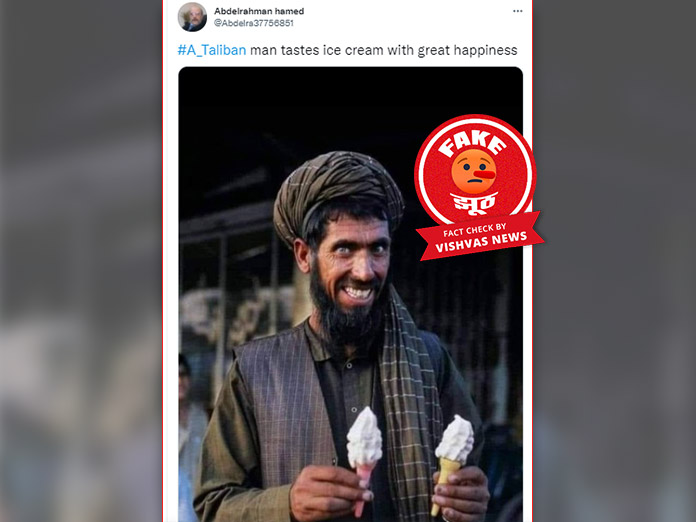 New Delhi (Vishvas News). After the Taliban took over Afghanistan, many pictures of Taliban fighters are going viral where they can be seen enjoying the urban life. In some videos, these Taliban fighters can be seen exercising in the gym, and in some other videos, they can be seen having fun in the amusement park. Amid all this, a picture is going viral where a person can be seen smiling holding ice creams in both hands. It is being claimed with the post that this is a recent picture from Afghanistan and the person in the picture is a Taliban fighter. Vishvas News found in its investigation that this claim is false. The viral picture is not recent but from 2002.

To check this post, Vishvas News did a reverse image search of this picture. We found this photo at iwastesomuchtime.com. The description along with the picture read “Afghan man holding his ice cream cone, Puli Khumri, Afghanistan.” And the credit for this photo was given to Steve McCurry.

We contacted Steve McCurry’s team about this by mail. In response we were told by his team member Paul Holland “In this photo, an Afghan man can be seen buying ice cream for his children. This photo was taken by Steve McCurry in 2002 in the town of Pol-e-Khomri, Afghanistan. “

This picture was shared by a Twitter user named Abdelrahman hamed with the wrong claim. The user is a resident of Egypt.

Conclusion: Vishvas News in its investigation found that this claim is false. The viral picture is not recent, but from 2002.