In the investigation of Vishvas News, this claim turned out to be false. The viral video is not related to the Russia-Ukraine war. This video is from 2004 Iraq. 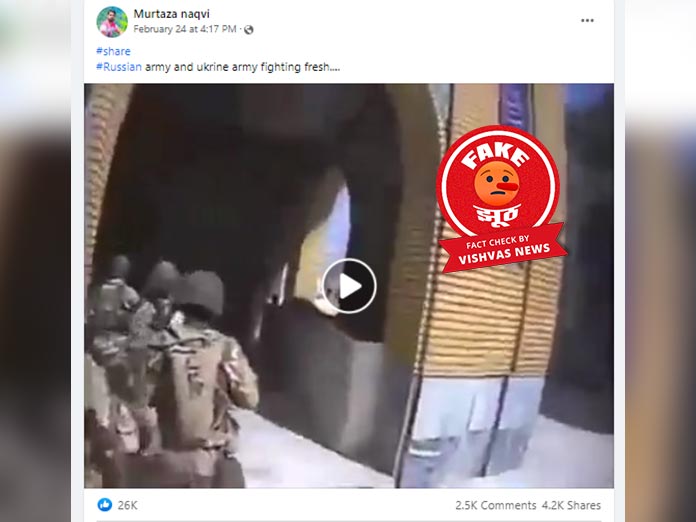 To investigate this claim, we first watched this video till the end. At the end, it was written: “Task Force Viper & The 36th Commando Bn Killed 4 Enemy, Captured 25 Enemy and Secured the Shrine Intact.” we searched with keywords and found that Viper Task Force is an unit of US forces and  36th Commando Battalion is an unit of Iraqi forces.

We then searched the keyframes of this video along with keywords on Google reverse image. We found a longer version of this video uploaded on the verified YouTube channel “FUNKER530 – Veteran Community & Combat Footage” on August 29, 2020. The description with the video read “Historical US Special Forces Raid On Golden Mosque”.

We also found a longer version of this video uploaded on a YouTube channel called Combat Footage on March 25, 2021. The video description read “US and Iraqi Special Forces Raid On Golden Mosque | October 1st, 2004. | Samarra, Iraq.” The detailed description with the video read “During the Battle for Samarra, also know as Operation Baton Rouge. US special forces and the 36th Iraqi Commando Battalion were in this assault. 25 Iraqi insurgents were captured and 4 were killed in this raid.”

From here we got the clue that this incident may be from 2004. On searching with keywords, we found details about this operation in the war logs of The Guardian. According to these details, this Golden Mosque operation tool place in 2004.

We also found a 2004 report in this regard at latimes.com.

In the collage below you can see the similarities between the building seen in the viral picture and the Golden Mosque of Iraq.

Vishvas News has contacted the fact-checking team of Ukraine via email for confirmation in this regard. The news will be updated as soon as the reply is received from there.

The viral post has been shared by a Facebook user named “Murtaza Naqvi.” The user has 7,728 followers.

Conclusion: In the investigation of Vishvas News, this claim turned out to be false. The viral video is not related to the Russia-Ukraine war. This video is from 2004 Iraq.