Fact check: Picture of Kabul’s Snow-Covered Road Viral in the Name of Karachi 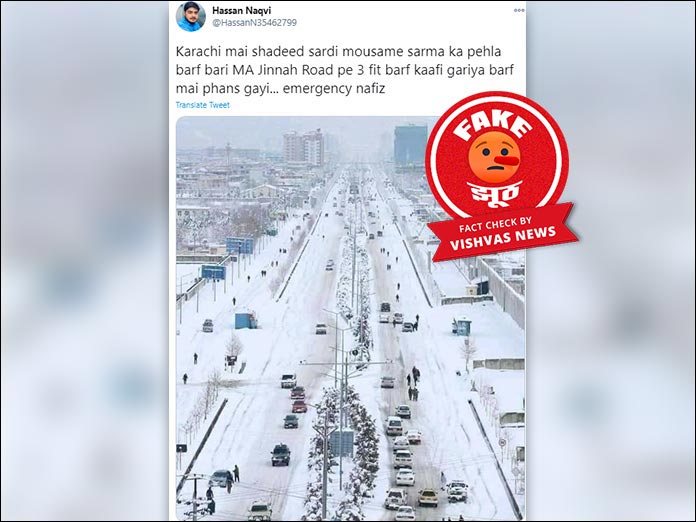 New Delhi (Vishvas News). A picture of a snow-covered road is going viral on social media. Users are sharing the photo and claiming that the photo is of MA Jinnah Road, Karachi, Pakistan.

Vishvas News checked the claim and found that the viral image of the snow-covered road is not from Karachi but from Kabul, Afghanistan which was taken during last winter by a photographer named Aman Sadaqat.

Twitter user Hassan Naqvi tweeted a picture of a snow-covered road and claimed, “The first snowfall of a severely cold winter in Karachi. 3 feet of snow on MA Jinnah Road.”

To begin our investigation, we searched for the viral image using Google Reverse Image. We found that a Facebook user Aman Sadaqat shared the same image in February 2019 and wrote that this is from Darulaman Road in Kabul.  Aman Sadaqat is a photographer from Afghanistan. The watermark of his name can also be seen in the photo shared by him.

You can see a collage of both images below.

Vishvas News contacted Aman Sadaqat, the photographer who took this photo, and shared with him the viral post. He told us, “I took this picture at Darulaman Road from the roof of the historic Darulaman Palace in Kabul in the winter. People should think before sharing fake claims and should not spread such fake news.”

We also found a similar looking picture of Kabul’s Darulaman Road published in the New York Times in 2017.

For more confirmation and information, Pratyush Ranjan, senior editor of Jagran New Media, contacted a senior Pakistani journalist, Lubna Jerar Naqvi. She said, “This picture is not of MA Jinnah Road, Karachi. There is usually no snow in Karachi.”

We searched for pictures of MA Jinnah Road in Karachi on Getty Images. These images looked very different from the viral image.

We scanned the profile of Twitter user Hassan Naqvi, who shared the photo with fake claim. We found that the user joined Twitter in October 2020.

Conclusion: Vishvas News found in its investigation that the image of the snow-covered road going viral in the name of MA Jinnah Road in Karachi is an old image from Kabul, Afghanistan.