Fact Check: This emotional picture is not from Ukraine, false claim viral

Vishvas News investigated and found that the viral photo is from Istanbul and not Ukraine. 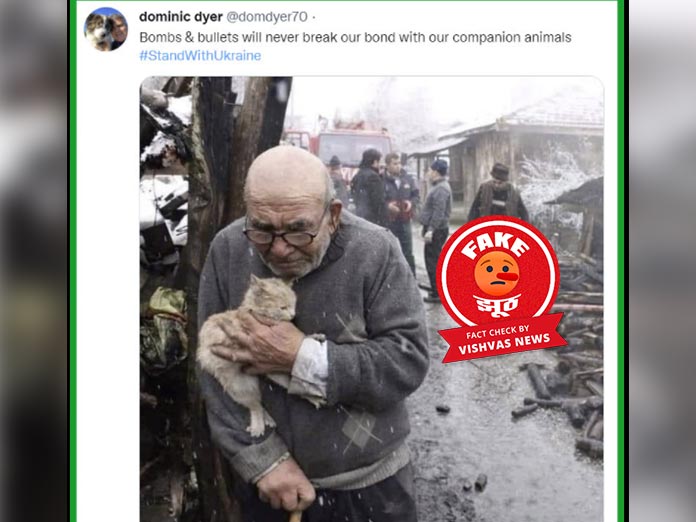 New Delhi (Vishvas News). Amidst the Russia-Ukraine war, many types of fake posts are viral on social media. In one such viral picture, an elderly man can be seen crying while holding a cat in his hands. Users are making this photo viral, claiming that it is from Ukraine. Vishvas News investigated the viral post. The claim turned out to be false. The viral picture is from Istanbul, not Ukraine.

Vishvas News started the investigation with Google reverse image search. We found this photo in a 2018 news article on dailysabah.com. According to the news “The residents of Ordular village in western Turkey’s Mudurnu district were saddened Wednesday after witnessing the tragedy of an old man and his beloved cat, who helplessly watched their home burn down. 83-year-old Ali Meşe accidentally started the fire himself, while trying to light his heating stove with gasoline.”

We also found this photo in a gallery of trtworld.com. It was uploaded in 2018 stating that the picture is from Istanbul.

We reached out to Daily Sabah’s web editor Sinan Ozturk via Twitter about this. In response, he said, “As stated in our article, this picture is actually from Turkey. It has nothing to do with Ukraine.”

At the end of the investigation, Vishvas News scanned the profile of the user who made the picture viral with the false claim. Social scanning of Facebook user Petros Regos revealed that the user is a resident of California.

Disclaimer: The article is updated with additional quotes from the Journalist of Daily Sabah, Sinan Öztürk.

Conclusion: Vishvas News investigated and found that the viral photo is from Istanbul and not Ukraine.