Fact Check: This photo of firefighters is not from Ukraine, misleading claim goes viral

Vishvas News investigated and found that the viral post is fake. The picture is from Australia, not Ulraine. 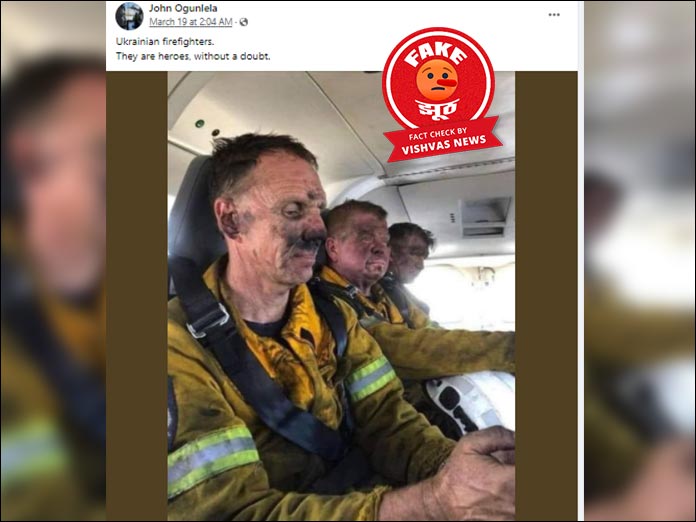 New Delhi (Vishvas News). Amidst the Russia-Ukraine war, many types of fake posts are viral on social media. IN one such viral image, three firefighters can be seen. Users are making this photo viral, claiming that it is from Ukraine. Vishvas News investigated the viral post. It turned out to be false. The viral picture is of Australia, not Ukraine.

Facebook user John Ogunlela posted the viral picture and wrote: “Ukrainian firefighters. They are heroes, without a doubt..” Archive link.

Vishvas News started the investigation with Google reverse image search. We found this photo in a 2019 news story on nzherald.co.nz. According to the news, “A photograph of three exhausted firefighters has been shared across social media, with people praising the men for their “selfless” act. The worn-out firefighters were pictured covered in ash after battling bushfires in Tasmania. More than 191,000 hectares have been destroyed across the state. The picture was shared to Facebook by The Wolfe Brothers and shows Jason Luck, John Kroczewski, and Paul Catteral.”

According to this news, the picture was shared on Facebook by The Wolfe Brothers. Upon searching, we found this picture uploaded on February 1, 2019, on The Wolfe Brothers’ Facebook page. The description read “Is it the Diesel, or the barb wire, or breaking your back to fight a Bush Fire” If you are unaware currently in Tasmania there is some seriously bad Bush Fires. Nearly 3 percent of the state has been destroyed. A friend sent us this photo.. LOOK at these incredible men, they look like they have been in a war zone! appreciate you and can’t thank you enough for what you do! #Respect Thank you to these men pictured, Jason Luck, John Kroczewski, Paul Catteral. Photo Captured by another brave Fire Fighter John Lyons”

We also found this photo in a 2019 article on sbs.com.au. According to the information available here, this picture is of Tasmanian in Australia.

We have contacted The Wolf Brothers via mail regarding this matter. This news will be updated as soon as a response is received.

CLICK HERE TO READ THIS FACT CHECK IN HINDI.

Conclusion: Vishvas News investigated and found that the viral post is fake. The picture is from Australia, not Ulraine.