Fact Check: This Woman Is An Airsoft Gamer And Not An American Army Soldier; She Has No Relation With Sulaimani’s Death 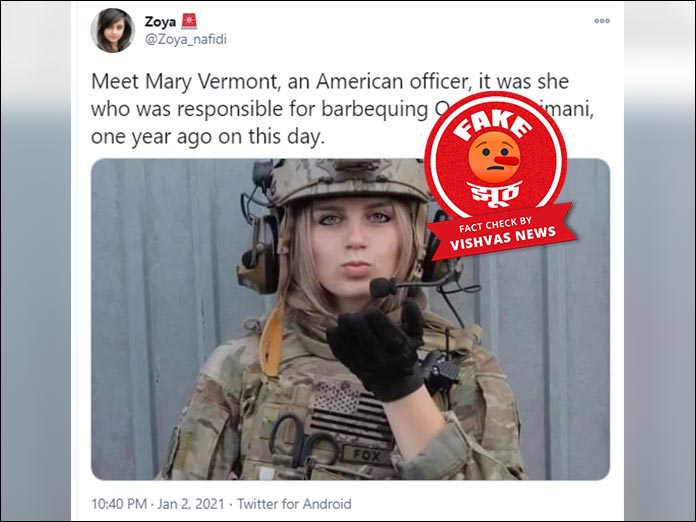 Vishvas News investigated and found the claim to be false. The woman is not an American Army soldier. She is an airsoft gamer.

The viral post claimed: “Meet Mary Vermont, an American officer, it was she who was responsible for barbequing Qasim Soleimani, one year ago on this day.”

We searched the viral photo on Google using the reverse image search tool. We found the same picture on vk.com. In this post, the woman was described as an airsoft gamer and her name is Yulia Chabanova. It has also been mentioned that Yulia has been playing airsoft games since 2017. Yuliya Chabanova has also uploaded videos about her new airsoft military strikes on her YouTube channel White Fox Airsoft.

We also found the viral picture on Yulia’s Instagram account. In her bio, she has written that she is a gamer and based in Kazakhstan.

Airsoft is a competitive team shooting game, in which participants play with plastic projectiles instead of real bullets. The player targets and tags rivals and knock them out of the game.

We contacted Yulia regarding the viral post through message. She replied: “This is a sheer nuisance. I am not a soldier. I am a social influencer and a gamer.”

When we searched for Qasim Sulemani on the Internet, we came to know that Sulemani died in a drone attack on 03 January 2020. We also searched reports on BBC, New York Times, and Al Jazeera regarding the same subject. We did not find any such claim related to a female soldier named Mary Vermont who fired missiles on Sulemani’s convoy.

The post was shared with a Twitter handle named @Zoya_nafidi. We scanned the profile of the user and found that the user has 4,232 followers.

Conclusion: Vishvas News investigated and found the claim to be false. The woman is not an American Army soldier. She is an airsoft gamer.