Fact Check: Jio Mart is not providing franchise, the viral claim is fake 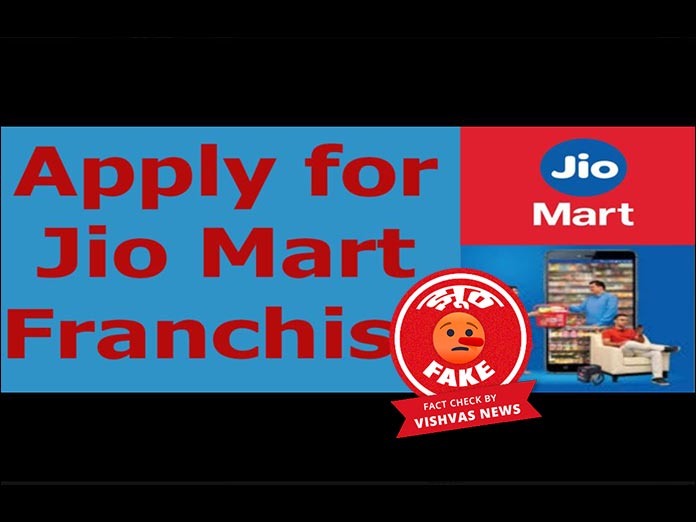 New Delhi (Vishvas News). Shortly after Reliance launched Jio Mart, several posts on social media claim to have details for obtaining franchise. On the Facebook page ‘Jiomart Franchise’, we accessed a form to apply for the franchise of Jio Mart.
Vishvas News investigation revealed the claim to be fake. Currently, the company is not providing dealership or franchise of any kind.

The Facebook page ‘(archive link ) Jiomart Franchise’ has appealed for the franchise’s application. People are directed to fill the form for application by clicking on to this sites.google.com/view/jiomartfranchise/apply-no (archive link of the form ).

According to a Bloomberg Quint report , published on May 24, Reliance started trials of JioMart shopping portal nationwide. We accessed the official JioMart website at www.jiomart.com to collect further details.
In the About Us section, we also found the email ID: cs@jiomart.com to contact the company.

We could confirm evidently that the mail ID provided in the viral message ‘jiomartfranchiseapply@gmail.com’ has no authenticity. Jio Spokesperson also clarified this to us in a conversation.
“We do not use any email id as like gmail.com. JioMart is not currently offering any kind of franchise nor has it hired any person… or dealer. Moreover, we do not charge for franchise,” he said.

We contacted the number provided in the viral post to enquire about franchising with JioMart. We were asked to submit couple of documents on WhatsApp.

While we enquired the spokesman over the WhatsApp reply, he said, “This is an attempt to cheat. We have sent it to the concerned team to take action against this page. There are many fake websites operating in our company’s name. We appeal to the common people not to get into this kind of fake website. The official website of Jio Mart is www.jiomart.com.”

We found many such articles in our news search where Reliance Retail has alerted people to be careful about fraudulent websites. According to the News18 report published on August 27 , Reliance Retail has appealed to consumers to be cautious about the fake website known as Jio Mart.

An explanation has also been issued from the official Facebook page of Reliance Industries. The video states, “The official website of Jio Mart is www.jiomart.com and we are not currently operating any kind of franchise model.”

Reliance has listed such fake websites similar to their name.

The unauthorized facebook page has been active since August 5, 2020 with 42 followers.

Conclusion: Jio Mart is not providing franchise or dealership. The viral claim is fake.