The claim turned out to be fake in the investigation of Vishwas News. Reliance Spokesperson while talking to Vishvas News said that this is just a rumour. The Conglomerates are not allowed to own the banks. 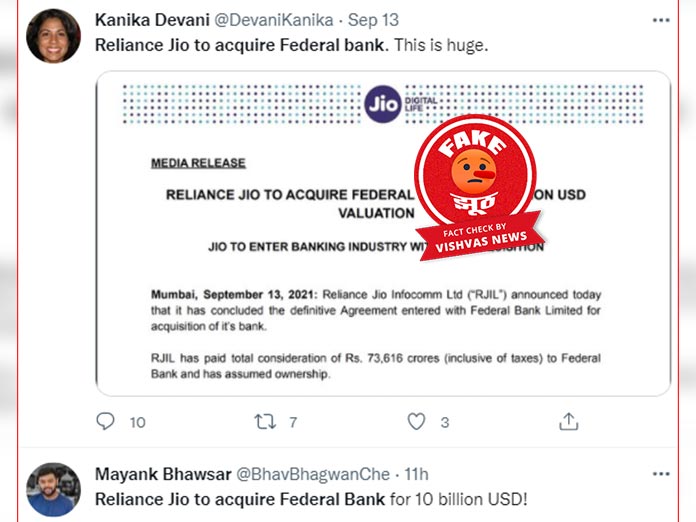 New Delhi (Vishvas News): A letter is going viral on social media, in which it is being claimed that Reliance Jio is going to acquire Federal Bank and this deal has been done for 73616 crore. In the investigation of Vishvas News, the claim turned out to be fake. Reliance Spokesperson while talking to Vishvas News said that “this is just a rumour. Corporate houses are not allowed to own banks.”

VALUATION; JIO TO ENTER BANKING INDUSTRY WITH THE ACQUISITION; Mumbai, September 13, 2021: Reliance Jio Infocomm Ltd (“RJIL”) announced today that it has concluded the definitive agreement entered with Federal Bank Limited for acquisition of its bank. RJIL has paid total consideration of Rs. 73,616 crores (inclusive of taxes) to Federal Bank and has assumed ownership. With this trading of information the Federal Bank will be wholly-owned subsidiary of Reliane Jio Infocomm Ltd(“RJIL”)”

To check this post, we first searched Federal Bank’s website and social media handles. We did not find any such news anywhere.

No such news was found on the website and social media handles of Reliance Jio as well.

‘Media Release’ is written on top of this letter. Being a part of the media, the business team of Vishvas News receives all the press releases of Reliance Jio. We checked our mail but could not find this press release anywhere. The last press release that came from Reliance’s was about government reforms.

Its screenshot can be seen below.

Regarding this, Vishvas News contacted the spokesperson of Reliance Jio. Talking to us, he said “This letter is absolutely fake. As per RBI guidelines, Jio or any other Conglomerates cannot take over any bank.”

This claim was shared on social media by a Twitter user named Kanika Devani. The user has 18 followers.

Conclusion: The claim turned out to be fake in the investigation of Vishwas News. Reliance Spokesperson while talking to Vishvas News said that this is just a rumour. The Conglomerates are not allowed to own the banks.