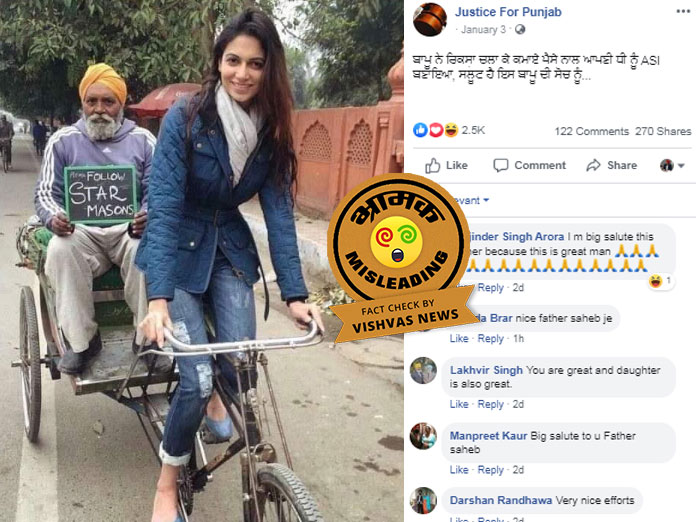 In our investigation, we found the claim to be fake. The girl in the viral image is former Miss India Universe Simran Kaur Mundi. She is an actor and model. The concerned image was shot when she was promoting a campaign for entertainment company Star Mason in 2016.

In the viral post, a girl can be seen pulling a rickshaw. Post’s description says: A father made his daughter ASI by pulling the rickshaw. Salute to the Father.

Archived version of the viral post can be seen here.

In the viral image, the person who is sitting on the rickshaw is holding a placard with ‘Follow Star Mason’ written on it.

In our Google search, we found that Star Mason is an entertainment company that sponsors shows of several artists.

To get official confirmation regarding the viral post. We contacted Simran Mundi through Email. In revert, Simran Mundi’s team told vishvas: “The image mentioned here in this post is of Simran Kaur Mundi and a rickshaw driver whose rickshaw Simran is riding. Viral post is misleading and factually incorrect.”

Many people are sharing this post on social media. One of these is a Facebook page named “Justice For Punjab”. The page has a following of 53,015.

Conclusion: In our investigation, we found the claim to be fake. Girl in the viral image is former Miss India Universe 2008 Simran Kaur Mundi and she was just promoting an entertainment company Star Mason by riding a rickshaw.