Fact Check: Old picture of a crowded river in Finland is being shared with the claim that it is from the US

The viral claim turned out to be false in the investigation of Vishvas News. The picture has nothing to do with America, the viral picture is from Finland. 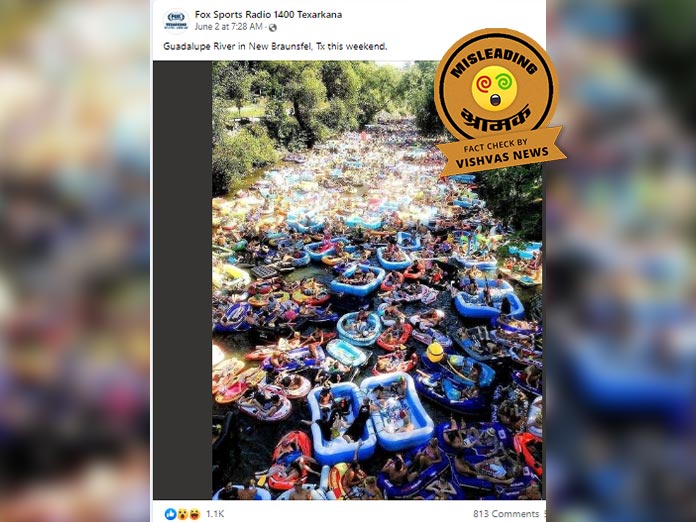 New Delhi (Vishvas News). A picture is going viral on social media. In the picture, several floating tubs with people on them can be seen in a river. It is being claimed with the post that this is a picture of Texas, America. The viral claim turned out to be false in the investigation of Vishvas News. The picture has nothing to do with America, the viral picture is from Finland.

To know the truth of the viral picture, Vishvas News searched this picture through Google reverse image. We found the viral picture in a tweet (Archive) made in 2017 on the Twitter handle named Discovering Finland. According to the accompanying description, the picture is of the Floating Beer Festival in Finland.

We also found this photo at kaljakellunta.org. On searching, we came to know that kaljakellunta is a Finnish word that means floating beer festival. This website is about the Floating Beer Festival of Finland. We found many more photos from this festival here.

We contacted US-based journalist Pratik Goyal in this regard. He told us “I currently live in New York but am originally from Texas. My mother is still in Texas. This picture is not of the Guadalupe River. I have never seen the Guadalupe River so crowded.”

Vishvas News, in the last phase of the investigation, conducted a background check on the profile that shared the viral post. We found that the user “Fox Sports Radio 1400 Texarkana” is followed by 209,990 people.

Conclusion: The viral claim turned out to be false in the investigation of Vishvas News. The picture has nothing to do with America, the viral picture is from Finland.