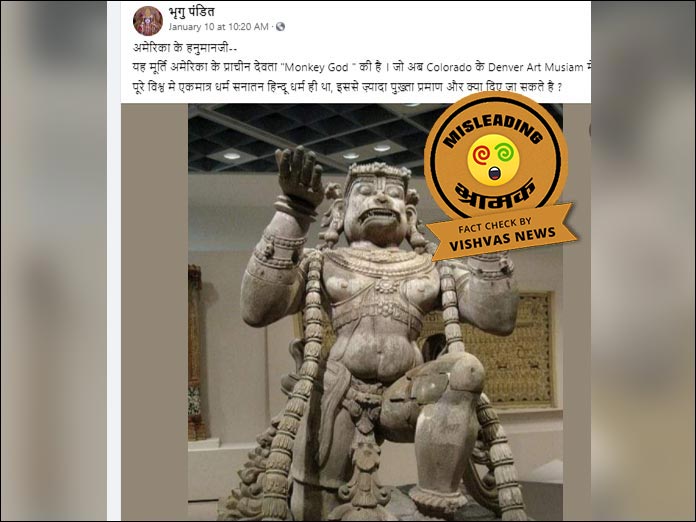 New Delhi (Viral News): A post is going viral on social media showing a picture of a sculpture resembling the Hindu God Hanuman. As per the claim alongside the post, the sculpture is of the ancient American Monkey God placed in the Denver Art Museum.

Vishvas News investigated and found that it is an old sculpture of the Hindu God Hanuman and not of American monkey god.

On January 10, Facebook user Bhrigu Pandit uploaded two pictures and wrote: “Hanumanji of America – This idol is of the ancient god of America ‘Monkey God’ which is now in Denver Art Museum, Colorado. Sanatan Hinduism was the only religion in the whole world, what more can be done than this?”

The picture’s description on the website read: “This wooden sculpture was carved by an unknown artist during the 1800s in Southern India (perhaps in the regions of Tamil Nadu or Kerala).” This sculpture shows Hanuman, the Hindu monkey-god, kneeling in devotion to the god Rama.” The sculpture shows the Hindu monkey god Hanuman, who has bowed down in devotion to Lord Rama. ” According to the description on the website, the statue was purchased by the museum in 1991.

Vishvas News contacted the Denver Art Museum via email for further confirmation. As per their response, “This statue was purchased by the museum in 1991. The idol was built by an unknown artist from southern India during the 1800s. The idol represents the Hindu god Hanuman. “

We scanned the profile of the Facebook user Bhrigu Pandit who shared the viral post and found that the user has 12,542 followers.

Conclusion: Vishvas News investigated and found that it is an old sculpture of the Hindu God Hanuman and not of American monkey god.