Fact Check: The person reciting the Quran in this video is not footballer Ronaldo, but his doppelganger

We found in our investigation that this claim is fake. The person seen in the video is not Cristiano Ronaldo but his lookalike. 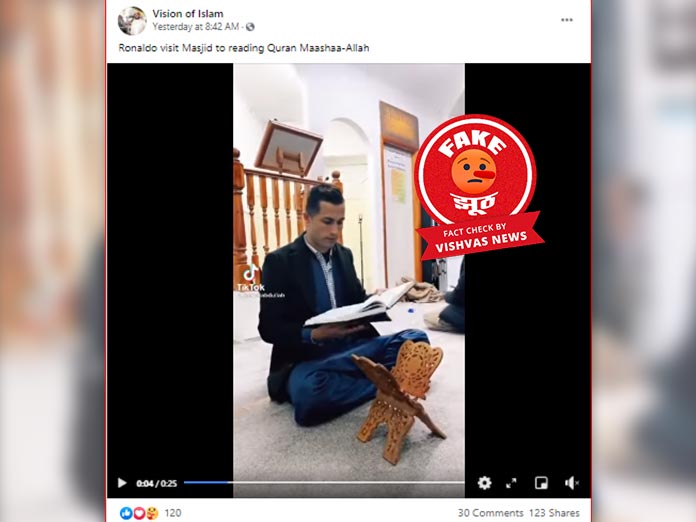 New Delhi (Vishvas News). A video is going viral on social media, in which a person can be seen reciting the Quran. It is being claimed with the post that this is the famous footballer Cristiano Ronaldo. We found in our investigation that this claim is false. The person seen in the video is not Cristiano Ronaldo but his lookalike.

It is being claimed with the viral video that the person reciting Quran is footballer Cristiano Ronaldo. The description reads “#Ronaldo visit Masjid to read Quran”

We took a closer look at this post to investigate. We found several comments saying that the man in the video was not Ronaldo but his lookalike, Bewar Abdullah. The video also has logo of Tiktok watermarked over it. We also saw Bewar Abdullah’s name at the end of this video.

We searched the Internet for the keyword Bewar Abdullah. We got several news reports saying that Bewar Abdullah is a lookalike of the famous footballer Cristiano Ronaldo and that is why he is very popular. He lives in Birmingham, UK.

There are restrictions on Tiktok in India. Because of this, we asked our foreign colleague to search Abdullah on Tiktok. Bewar Abdullah uploaded this viral video on his Tiktok. Its screenshot can be seen below.

We reached out to the BBC’s Birmingham-based journalist Audrey Dias via LinkedIn. She told us: “The man in the video is not footballer Cristiano Ronaldo but his lookalike Bewar Abdullah. Bewar Abdullah is very popular, and people are often deceived by his similar looks with Ronaldo.

We have also reached out to Bewar Abdullah via Instagram Messenger regarding this matter. This story will be updated as soon as the response is received.

This post was shared by a user named Vision of Islam on 9 July. The page has 1,910 followers.

Conclusion: We found in our investigation that this claim is fake. The person seen in the video is not Cristiano Ronaldo but his lookalike.