Fact Check: This is not a real-life incident, people are sharing scripted videos with the misleading claim

Vishvas News in its investigation found that this claim is false. Actually, this is a scripted video, which was made for the purpose of entertainment and spreading awareness. 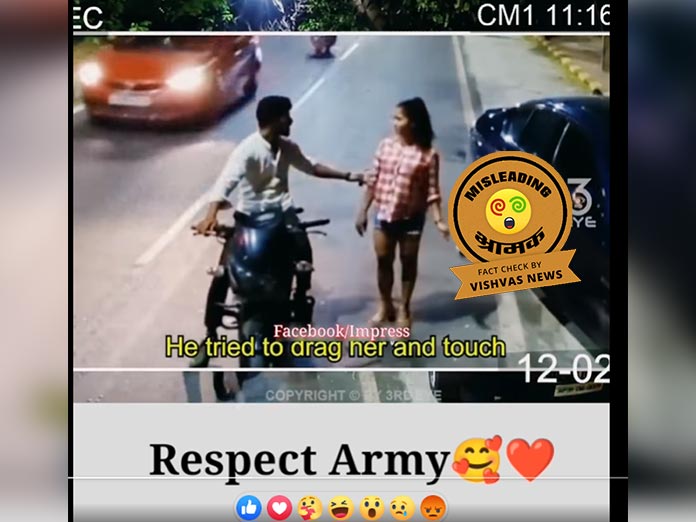 New Delhi (Vishvas News). A video of 2 minutes 52 seconds is going viral on social media. In this, a girl can be seen struggling as her car broke down on the road. In the video, a boy tries to harass her. Further in the video, a man wearing an army uniform comes on his bike and helps the woman. People are sharing this video claiming that this is a real incident captured on cctv camera. Vishvas News in its investigation found that this claim is misleading. Actually, this is a scripted video, which was made for the purpose of entertainment and spreading awareness.

Facebook page ‘Impress’ shared the viral video and wrote ‘Respect Army’ in the description. In the comments, people can be seen appreciating this video thinking it is a real incident.

Vishvas News first analyses the viral video properly. At the bottom of this video is written, “Copyright by 3RD EYE”

We then searched the screen grabs of the viral video by uploading it to the Google reverse image tool with the keywords ‘3RD EYE’. We found the longer version of this video uploaded on a YouTube channel named 3RD EYE on February 16, 2022. The video’s description read, “SALUTE TO THIS ARMY PERSON | Alone Girl Saved by Army Man | Social Awareness Video By 3rd Eye.” There is also a disclaimer at the end of this video. It reads that this is a scripted video and made for “education and entertainment purposes”.

When we checked the About Us section of 3rd Eye’s YouTube page. We found an email id. We got in touch with this email id. In response, we were told, “This video was made for education and entertainment purpose and there is a clear disclaimer given at the end of this video and also in the description. My appeal is not to share any video on this page with a false claim.”

Finally, we checked the page that shared the misleading posts. The Facebook page has 711 followers.

Conclusion: Vishvas News in its investigation found that this claim is false. Actually, this is a scripted video, which was made for the purpose of entertainment and spreading awareness.