FACT CHECK: This woman is old and mentally ill, not a child kidnapper 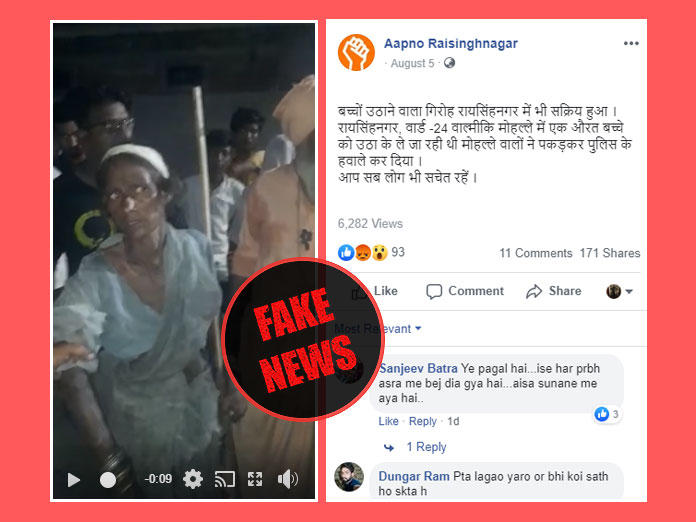 New Delhi (Vishvas Team).A video is going viral on social media in which a woman can be seen surrounded by a mob. The video claims in the description that the woman is a part of a child kidnapping gang that is active in Rajasthan’s Raisinghnagar. In our investigation we found that this claim is false. Actually, this woman is mentally ill and elderly who has nothing to do with child kidnapping.

In the viral video, a woman can be seen in the viral video. In a woman can be seen surrounded by a mob. The video description claims ” child-kidnapping gang is active in Raisinghnagar. In Raisinghnagar, Ward-24 Valmiki locality, a woman was trying to abduct a child but was caught. Locals handed her over to the police. You all should also be alert. “

To investigate this post, we inserted this video on the Invid tool and took out its key frames and then searched it on Google reverse image. We searched a lot but failed to find any news related to this video.

We then spoke directly to Sri Ganganagar District’s Raisinghnagar Police Station SHO Kishan Singh who told us that “this incident happened on 4 August 2019. Some people handed over this woman to the police. In our investigation we found that this woman is not a child kidnapper. She is mentally unbalanced and could not even speak. Seeing her condition, she was sent to Har Prabh Ashram in Padampur.”

For reconfirmation, we spoke to Vinod Kumar, caretaker of Har Prabha Ashram, who reaffirmed that this women was brought to his ashram on 4 August. Women is elderly and mentally incapable. There is no trace of her house right now as she is unable to speak.” Vinod also shared some pictures of her with us.

Conclusion: In our investigation we found that this claim is false. Actually, this woman is mentally ill and elderly who has nothing to do with the child kidnapping.