Fact Check: ‘Kaun Banega Crorepati’ is not giving any lottery of 25 lakhs; Beware of frauds

In the investigation of Vishvas News, the viral poster and audio in the name of KBC lottery proved to be fake. 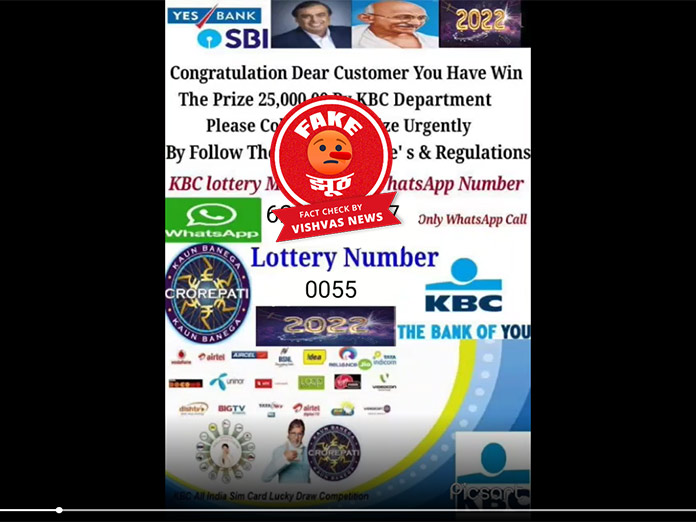 New Delhi (Vishvas News). A post is going viral on several social media platforms including WhatsApp, in which it has been said that the user has won a KBC lottery worth Rs 25 lakhs. Vishvas News investigated the viral post and found it to be fake.

Vishvas News received this claim on its chatbot tip line. The text on the poster read ‘Congratulation Dear Customer You Have Win The Prize 25,000,00 By KBC Department Please Collect Your Prize Urgently By Follow The Company Rule’s & Regulations. ‘KBC lottery manager Ka WhatsApp Number 6261903617 Only WhatsApp Call WhatsApp Lottery Number 0055.’ An audio is also attached with the post in which a man urges the public to make a WhatsApp call on the given number.

The content of the poster is as it is written here. View its archived version here.

Vishvas News first did a Google search by typing the relevant keywords to check the viral post. We got many reports about a fraud in the name of KBC. In a news published on Jagran.com on 9 October 2020, using a poster similar to the viral one, it was stated, ‘translated: Thugs have become active with the start of the tenth season of Kaun Banega Crorepati (KBC) TV show. The gang members are calling and pretending to give a reward of Rs 25 lakh. For this, a receipt for the lottery number is being sent on WhatsApp. Along with this, they are asked to make a WhatsApp call to a given number.

To know the intent of such messages, Vishvas News got in touch with cyber security expert Ayush Bhardwaj. “He told that by making such a post viral on WhatsApp, people are tricked that they have got a lottery, then some money is demanded in the name of transferring the lottery amount to the account by citing income tax laws. Explaining this, Bhardwaj told that for example, if there is a lottery of one lakh, then these people say that there will be a processing fee of thousand rupees, income tax of thousand rupees, etc. By doing this, these people trap the user into giving them small amounts. These people escape from the eyes of the police as they take small amounts from many people. Consumers should keep in mind that no mobile or TV company offers anything like a lottery.”

In the next phase of the investigation, we reached out to Smita Srivastava, who covers Entertainment Beat for Dainik Jagran in Mumbai. She contacted the PR team of KBC and was informed that such messages are fake. KBC never sends such messages.

At the end of the investigation, Vishvas News investigated the user who posted the fake message in the name of KBC. Social scanning of Facebook user “KBC head office helpline international what’s app number 00918145012894” revealed that the user posts fraudulent content in his account. A lot of information on the page has been hidden.

Conclusion: In the investigation of Vishvas News, the viral poster and audio in the name of KBC lottery proved to be fake.