Fact Check: No, Child didn’t die due to floods in Bihar 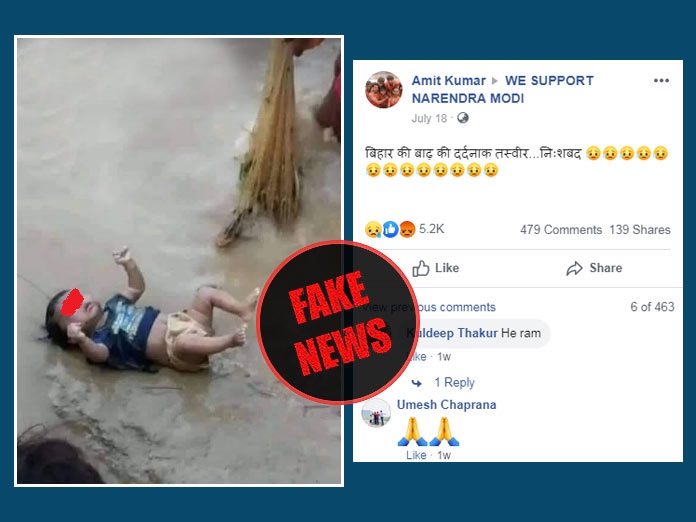 New Delhi (Vishvas Team). A picture is going viral on social media in which a dead body of a child can be seen. The picture is supported by a claim that reads: “A baby died due to flood in Bihar“. In our investigation, we found that the claim in the viral post is fake. In fact, the child shown in the viral picture was thrown by his own mother into the river Bagmati, which led the child to the death.

Facebook user Amit Kumar shares a picture in a group named WE SUPPORT NARENDRA MODI. In this picture, a dead body of a child can be seen with a claim: “A baby died due to flood in Bihar”.

After watching this post, Vishvas news decided to investigate the truth behind this picture. To start our investigation, we searched this photo on Google Reverse Image. In our search, we found a lot of links in which this picture has been used. In most of the links, we found this picture with the fake claim. Now, we have decided to search again using different keywords. In the search results, we got the news we want to know. We found a news at Dainik Jagran’s website revealing the truth behind this picture. Headline of this news is: VIDEO: सोशल मीडिया पर वायरल हो रही इस बच्चे की तस्वीर देखकर रो पड़े लोग, जानिए सच

You can read this news by clicking here.

By Dainik Jagran’s news, the truth has been revealed of this picture.

Also, in our investigation we found a tweet of News agency ANI, in which the DM of Muzaffarpur is giving statement on this case.

For more information, we contacted Muzaffarpur police’s PRO officer Kamal Singh. He told us, “This photo is getting viral on social media with fake claim. This child didn’t die due to flood in Bihar. The truth behind this is, her own mother throws him in the river Bagmati. Her mother had a fight with her husband and after that she tried to commit suicide with her four childrens. 3 childrens lost their life in this suicide attempt. A girl which is safely rescued from the river gave the statement that her own mother tried to throw us all with herself in the river Bagmati.”

The name of the mother whose children drowned is Reena and she had a fight with her husband over phone because her husband was in the Punjab that time. Also, Bihar Police’s PRO shared a press release of this case with us through Whatsapp, which you can see below:

We performed the physical verification of the Facebook user Amit Kumar who uploaded the post. We found that the user has more than 4000 friends on Facebook.

In our investigation we found that the viral picture’s claim is fake.The child appearing in the viral picture was thrown by his own mother into the river Bagmati, which led the child to its death.