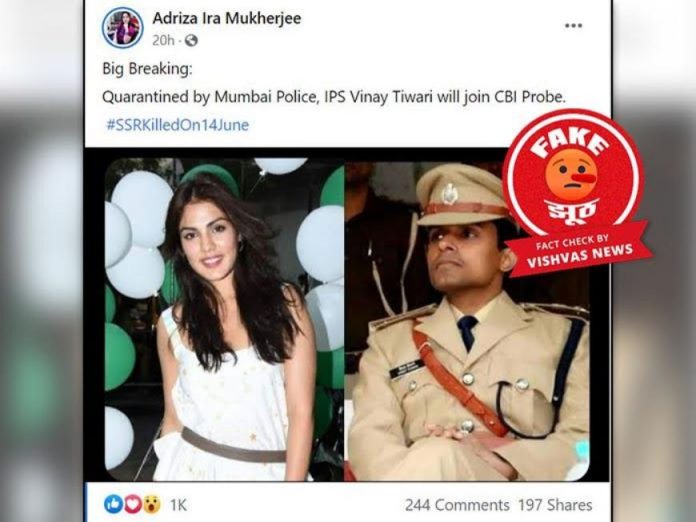 New Delhi (Vishvas News): A viral post on social media claims that IPS Vinay Tiwari who was quarantined by Mumbai Police will now join the CBI probe for Sushant Singh Rajput’s case. Vishvas News investigated the viral claim and found it to be false.

Among others, the Facebook user “Adriza Ira Mukherjee” has posted the photo collage of Rhea Chakraborty and IPS Vinay Tiwari with the caption: “Big Breaking: Quarantined by Mumbai Police, IPS Vinay Tiwary will join CBI Probe. #SSRKilledOn14June”.
The archived version of the post can be checked here.

The viral post claims that IPS Vinay Tiwari was quarantined by Mumbai Police. As per the media reports he was quarantined by BrihanMumbai Municipal Corporation (BMC) on August 2 when he had arrived in Mumbai to probe the Sushant’s case following an FIR lodged by the Bihar Police.

Vishvas News investigated by searching on Google using appropriate keywords but didn’t found any supportive media report regarding the same. If IPS Vinay would have been joining the CBI Probe, it would have made headlines.

To find out the truth, we further contacted IPS Tiwari who rubbished the claim by saying that he is not joining the CBI probe for Sushant’s case.

The post is shared on Facebook by a user named Adriza Ira Mukherjee. When we scanned the profile of the user we found that she is from Kolkata and lives in Agartala.