Fact Check: No, people singing in this video aren’t blind, claim in the viral video is fake 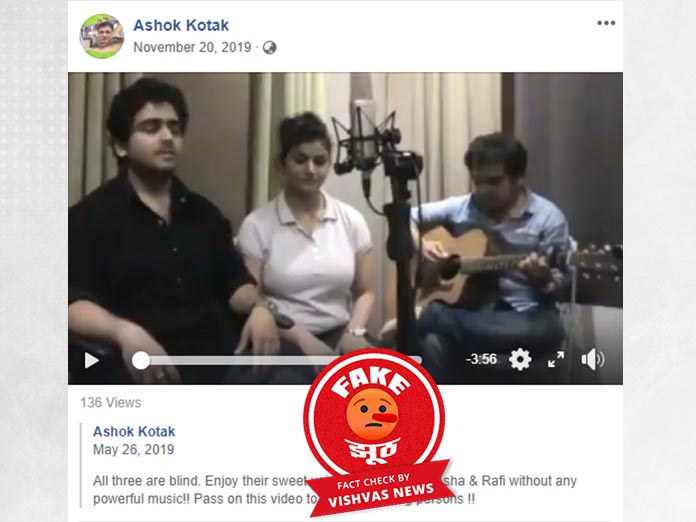 A video shared on social media by a user named Ashok Kotak shows three people singing a song. The claim with the video reads: All three are blind. Enjoy their sweet voice. They sing like Asha & Rafi without any powerful music!! Pass on this video to all music loving persons!! The archived version of the video can be seen here.

When Vishvas News started its investigation we found that the video with the same caption is shared across social media:

We used the Invid EU Chrome extension to extract the keyframes of the viral video.

On performing the Google Reverse Image Search on one of the keyframes we found a link of the same video uploaded on October 9, 2015 on a website downvids.net. The title of the video identifies the three singers as Abhas Joshi, Priyani Vani and Shreyas Joshi.

We searched the profile of one of the singers shown in the video Abhas Joshi on Facebook. We found the same video on Abhas Joshi’s Facebook profile uploaded on September 22, 2015.

The video was uploaded with the caption: Look who gave us a surprise visit at our studio..!! Priyani Vani our #oldfriend so we decided to jam on an #evergreen_melody happens to be one of the most favorite song of millions of people around the world

Nowhere in the post was mentioned that any of the persons singing in the video was blind.

We contacted Abhas Joshi directly and asked him about the claim in the viral video. He said: “This rumour started spreading sometime back that we are blind but by God’s grace, we all have good eyesight. Actually this video was randomly shot at our studio in Mumbai and as you can see that lights are pretty dim and also it’s pixelated because of over-compression so the video is not clear.”