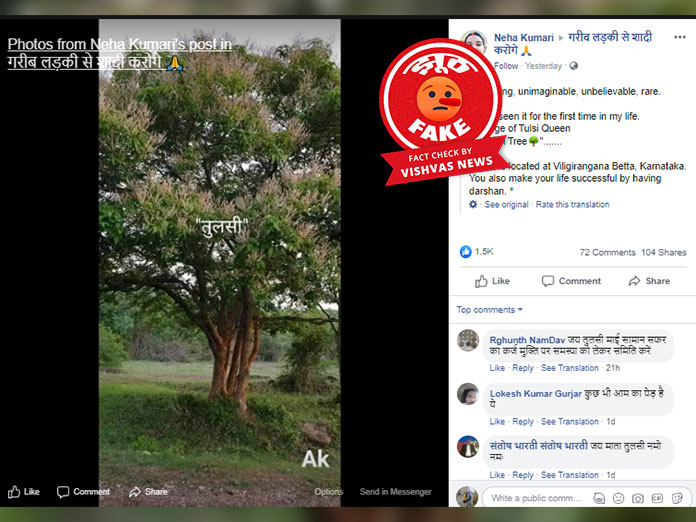 Vishvas News, New Delhi, A photo of a tree is going viral on social media with a caption that claims that it is world’s largest Tulsi tree and it is in Karnataka. Vishvas News investigated and found that the viral post is fake.

A photo of a tree is circulating on social media (Archive) with a claim that the largest Tulsi tree in the world has been found in Karnataka. The description reads ” Amazing, unimaginable, unbelievable, rare. I have seen it for the first time in my life. So huge tree of Tulsi Queen”Tulsi Tree”…….Which is located at Viligirangana Betta, Karnataka. You also make your life successful by having darshan.”

We searched with keywords to check the post. We found an article on guinnessworldrecords.com about Tulsi. According to the Guinness World Records website, the record for the tallest Tulsi plant in the world belongs to a Tulsi plant in the house of a Greek woman. Its length is 10 feet 11.5 inches. The website also has a picture of the plant, which is completely different from the viral picture.

According to a news published in 2020 on mathrubhumi.com, the height of a Tulsi plant in the house of a person from Tamil Nadu is 11 feet 1 inch. According to the news, this person is about to approach the Guinness World Record. The picture of the plant was also in this news, which is completely different from the viral picture.

For further confirmation, we spoke to Shruti Kasana, Assistant Professor (Guest Faculty), Department of Botany, University of Delhi. She told us, “Tulsi is a plant of the Lamiaceae family. It is native to the Indian subcontinent and is grown for medicinal reasons throughout the Southeast Asian tropics. Its average maximum height is up to 3 feet, but sometimes it can grow to 6 feet or more. The tree seen in the picture is not of Tulsi. Tulsi plants can never take the shape of a tree. It looks like a mango tree when it starts flowering. But this cannot be confirmed as the picture is not clear.”

This post was shared on Facebook by a user named ‘Neha Kumari’. The user is a resident of Himachal.

Conclusion: The post claiming that the tree shown the image is World’s largest Tulsi tree in Karnataka is fake.