Fact Check: This incident of breaking idols is from Bahrain, not Kerala

A video from Bahrain, about two years old, is being shared on social media platforms as that from Kerala. The police of Bahrain had taken legal action against the woman accused in this case. 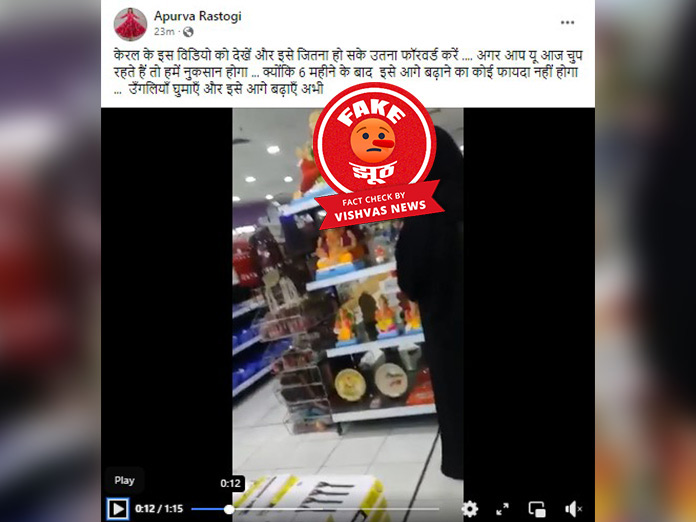 New Delhi (Vishvas News): A one minute fifteen second video is doing rounds on social media. In the video a burqa-clad woman smashes the idols of lord Ganesha in the supermarket. Users are claiming that the viral video is from Kerala. Vishvas News found in its investigation that the viral video is not from Kerala but from Bahrain. This case happened in August 2020, police had taken legal action against the accused.

Facebook user Apurva Rastogi (English translation) posted the video on July 19 and wrote, Watch this video from Kerala and forward it as much as you can. If u keep quiet today we will be at a loss… because after 6 months there will be no use to pursue it…

The archive version of the post can be checked by clicking here.

We started searching on Google through several keywords. We found a news report related to the claim on Aaj Tak. It was published by Aaj Tak on 17 August 2020. Some keyframes of the viral video can be seen in the report.

According to the news, a woman in Bahrain vandalised the idols of Lord Ganesha in a supermarket. After this incident, the capital police took action against the woman for insulting a religion and its tradition.

India Today also reported the news with the same information on 16 August 2020. According to the news, a burqa-clad woman first broke the idol of Lord Ganesha in a supermarket of Bahrain. Then she started shouting in Arabic at the employee.

Gulf News also covered this incident. According to a report, the police had taken action against the accused woman for vandalizing Hindu religious idols in the shop.

A senior Bahrain official had reacted to the incident and condemned the act as a “hate crime”.

The Ministry of Interior of Bahrain had given information on this matter by tweeting on 16 August 2020. Caption reads, “Capital Police took legal steps against a woman, 54, for damaging a shop in Juffair and defaming a sect and its rituals, in order to refer her to the Public Prosecution.”

For more confirmation, we contacted ADG (Law and Order), Kerala Police. We shared the viral video with him on whatsapp. He told us, ‘No such case has come to light in Kerala. This news is fake.’

We scanned the profile of Facebook user ‘Apoorva Rastogi’ who shared the old video with a false claim. According to the profile, she lives in Delhi. She is influenced by a particular ideology.

Conclusion: A video from Bahrain, about two years old, is being shared on social media platforms as that from Kerala. The police of Bahrain had taken legal action against the woman accused in this case.