Video of cops beating tourists going viral as from Kerala is from Rautwadi waterfalls, Kolhapur. Viral claim is misleading. 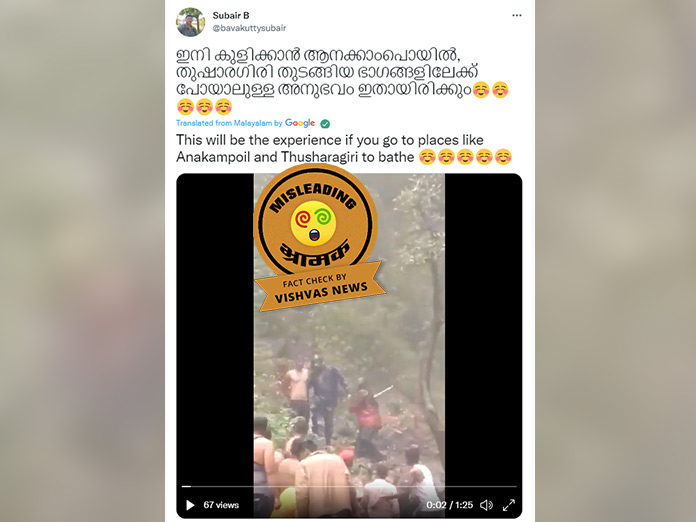 Translation: This will be the experience if you go to places like Anakkampoyil and Thusharagiri to bathe

We also found the video being shared on the YouTube

We also found the video being widely shared on Facebook.

Vishvas News started the investigation with uploading the video in Invid tool.
We then got various keyframes from the same.

Vishvas News used Google Lens on each frame. Using Google Lens on one frame led us to a link that suggested that the frame is from Rautwadi waterfall.

Taking the hints we then searched Google using keywords. We found numerous news articles related to the incident.

We found a report published in Marathi Daily, Lokmat which stated that cops had beaten the tourists who were drunk and create a ruckus at Rautwadi waterfalls. This news report also had the viral video.

We also found the same report on the website of tv9Marathi stating this video was from Rautwadi, Kolhapur.

In the next step of investigation we contacted senior journalist from Kolhapur, Asif Kurne who confirmed that the video was from Rautwadi waterfalls in Kolhapur. He also shared a published report in Lokmat of the same in Marathi.

In the last step of investigation, Vishvas News conducted a background check of the user who had shared the video, Subair B is on Twitter since April 2015 and has 551 followers.

Conclusion: Video of cops beating tourists going viral as from Kerala is from Rautwadi waterfalls, Kolhapur. Viral claim is misleading.