The viral CNN tweet screenshot is fabricated. CNN did not do such story on China. 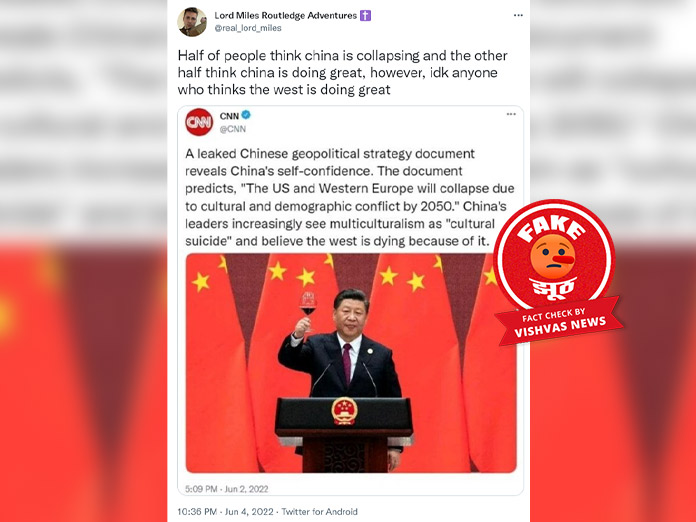 New Delhi (Vishvas News): Vishvas News came across a screenshot of a tweet reportedly from CNN being shared on Facebook and Twitter. The tweet said that a leaked Chinese geopolitical strategy document reveals China’s self-confidence. Vishvas News in its investigation found the CNN tweet to be fabricated. Viral post is fake.

The Tweet said: A leaked Chinese geopolitical strategy document reveals China’s self-confidence. The document predicts, “The US and Western Europe will collapse due to cultural and demographic conflict by 2050.” China’s leaders increasingly see multiculturalism as “cultural suicide” and believe the west is dying because of it.

Vishvas News started its investigation by observing the tweet first. It appeared that the tweet was made on June 2, 2022.

Vishvas News then checked the social media handles of CNN.

Vishvas News did not find any such content anywhere.

Also, Vishvas News found out that the content exceeds the character count.

In the last step of investigation, Vishvas News connected with Matt Dornic, head of strategic communications at CNN worldwide. He said, “CNN neither published that story nor posted it to its Twitter feed. The image is fake.”

In the last step of investigation, Vishvas News conducted a social background check of the Twitter handle that posted the fabricated tweet. Lord Miles Routledge Adventures has 114.7K followers on Twitter.

Conclusion: The viral CNN tweet screenshot is fabricated. CNN did not do such story on China.