Fact Check: Viral video of snake and rats roaming on Ganesha idol is old and not from Nagpur

Viral video of white rats and snake on Ganesh idol is not from Nagpur. The viral video is old and is on the internet since 2020. 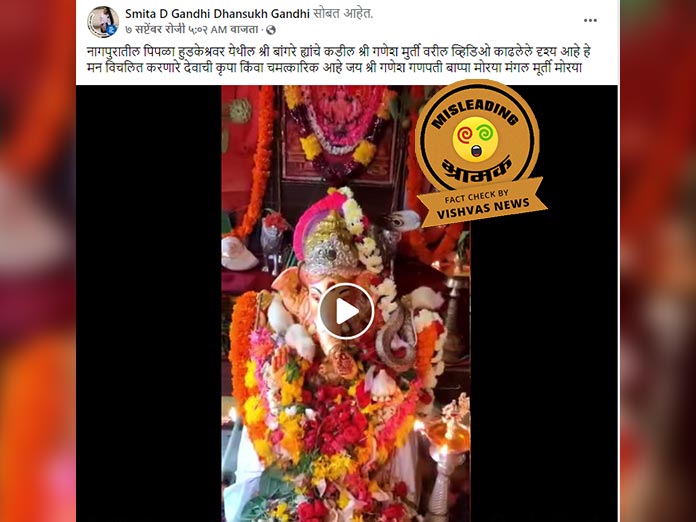 New Delhi (Vishvas News): Vishvas News came across a post being widely circulated on WhatsApp and other social networking platforms. The post had a video of a small Ganesh idol amidst the 10-day Ganesh festival and white rats and a snake could be seen together on the idol.
Social media users are claiming that the video is from the residence of Mr Bangre, residing in Pipla Hudkeshwar in Nagpur.
Vishvas News in its investigation found that the video was hugely circulated in the year 2020 and that it is not from Nagpur.

Translation: These are the visuals clicked on the Ganesh idol at the residence of Mr Bangre who stays at Pipla Hudkeshwar, Nagpur. These visuals are disturbing as well as miraculous. Ganapati Bappa Morya Mangal Murti Morya.

Vishvas News started its investigation with InVid tool and extracted keyframes. Vishvas News then ran a Google Reverse Image search on all the keyframes.

Along with it, Vishvas News also searched on the Google with appropriate keywords.

We found the video on the website of Punjab Kesari. The news did not mention its location though. This article was uploaded on 31st August, 2020.

We also found an article on latestly.com about the viral video uploaded on September 9, 2022. The article mentioned that the video was taken in the year 2020.

We also found the video uploaded on a YouTube channel on August 30, 2020.

Vishvas News also found the video uploaded on Facebook page VideoPlus, that claimed that the video was from Kolhapur.

In the next step of investigation Vishvas News reached out to Nagpur’s ANI correspondent Saurabh Joshi. He informed that there is no such information that the video is from Nagpur. He also said that the viral video is old.

However, Vishvas News is not able to independently verify the actual location of the viral video.

In the last step of the investigation, Vishvas News conducted a social background check on the profile that shared the viral video. Smita Gandhi is a resident of Ozona Texas and has 2.3K friends.

Conclusion: Viral video of white rats and snake on Ganesh idol is not from Nagpur. The viral video is old and is on the internet since 2020.