Fact Check: Woman appearing in the video is a fake ASI from Gurdaspur 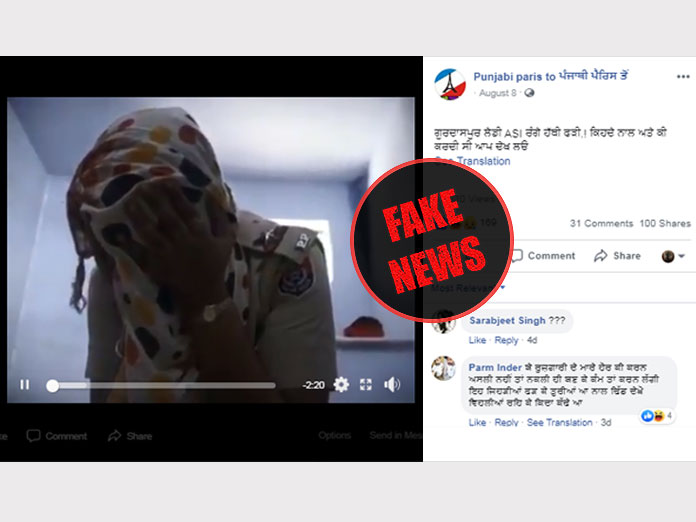 New Delhi (Vishvas News). A post is going viral on the social media platform Facebook. The video post is claiming that a lady ASI has been arrested in Gurdaspur. In the video, some Punjab Police officers can be seen arresting a lady wearing a Police uniform and her face covered with a piece of cloth.

To start the investigation, we used the INVID tool and took out some keyframes. Then, we searched these keyframes on Google Reverse Image and found the same video on Youtube. Video had been uploaded by an account named NewsBox_Punjab. NewsBox_Punjab had uploaded this video on Jul 25, 2016. The headline of the video was: “ਨਕਲੀ ਪੁਲਿਸ ਏ ਐਸ ਆਯੀ ਔਰਤ ਗਿਰਫਤਾਰ, Fake ASI woman arrested,नकली पुलिस की ए एस आई औरत गिरफ्तार” English Translation: Fake lady ASI arrested in Gurdaspur.”

The video description was, “Gurdaspur police arrested a woman who called herself ASI in police and always wore police uniform ..she wanted to impress a police officer.”

Aside from this, we got a news article of Dainik Jagran regarding this incident. The headline of the news article was: लड़के का प्रेम पाने को बन गई नकली एएसआइ और फिर…

You can see the screenshot of the article down below and read the story by clicking here.

To get more information on this, we spoke to Punjabi Jagran’s reporter Ranbeer Aakash who covers the Gurdaspur area. Ranbeer confirmed, “The event shown in the video is 3 years old. The woman appearing in ASI’s uniform is actually an ordinary girl. She wanted to marry a Police officer who wanted her wife to be a Police officer. Because she was not a Police officer, someone gave her the advice to become a fake police ASI. After that, the girl bought the uniform from Jalandhar and told the boy that she is an ASI who is posted in Gurdaspur. One day, she got caught by some officers and they found that she is a Fake ASI. After that, they took her to the City Police station where she confessed her guilt.”

The post was shared on a Facebook page named Punjabi paris to ਪੰਜਾਬੀ ਪੈਰਿਸ ਤੋਂ. This page has a total of 631, 558 followers. This page mostly shares news related to Punjab and Punjabi Culture.

Conclusion: In our investigation, we found the post’s claim to be fake. The original video is from September 2016 and the truth is, the woman in the video was arrested because she was disguising as a police officer in Gurdaspur.