Fact Check: Did this girl rescue Koala bear from Australia Bushfire? No, this is a digitally created artwork 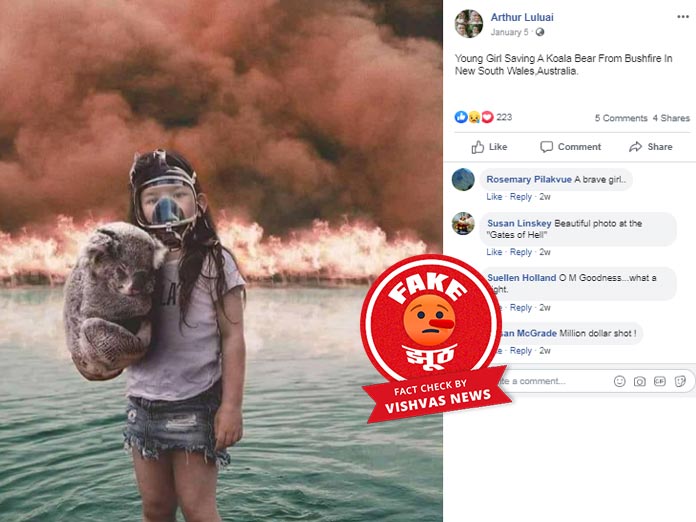 News Delhi (Vishvas News). A viral post on social media shows an image of a girl holding a Koala Bear in her hands with large fire rages in the background. Users are claiming that this girl saved a Koala Bear in the Australian Bushfire. In our investigation, we found the claim to be fake. In fact, the viral image is a digitally created artwork and is created as a tribute for firefighters who are trying to save Australia from Bushfire.

Viral post on social media shows an image of a girl holding a Koala Bear in her hands. By sharing this image, a user named Arthur Luluai wrote: “Young Girl Saving A Koala Bear From Bushfire In New South Wales, Australia.” The archived version of the post can be checked here.

When Vishvas News started its investigation we found that the post is shared across social media with various claims. We performed Google Reverse Image Search of the viral photo and found the same photo on the Instagram account of a photographer and Digital Artist “Thuie”.

In the post, “Thuie” confirmed that the viral image is not a real picture but an Artwork created by her as a tribute to firefighters who are trying to save Australia from Bushfire.

Also in Google Reverse Image Search, we found a link of Brut Nature’s Facebook video. In the video, they mentioned that the viral image in which a girl is holding a Koala Bear is just an artwork.

Vishvas News contacted the photographer “Thuie” through Facebook messenger asking whether the photo was clicked by him or is it an artwork of Australian Bushfires. She replied: “My Instagram post states that this is art. I am a digital artist as well as a photographer. People, unfortunately, are sharing the image without finding the proper creator and its description. I created this piece before Christmas to raise awareness and to thank all the firefighters who are working hard.”

Many people are sharing this post on social media. One of these is a Facebook user named “Arthur Luluai”.

Conclusion: No, this image is not of a girl saving a Koala Bear in the Australian Bushfire. It is a digitally created artwork.