Fact check: Video of bikes slipping on road is not from Sanpada, Navi Mumbai but from Karachi

Viral video of bikers seen as skidding is not that of Sanpada, Navi Mumbai as claimed but from Karachi, Pakistan. 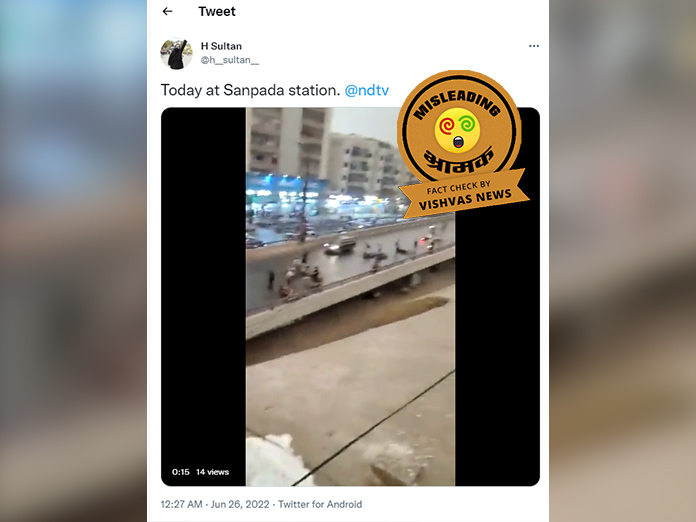 New Delhi (Vishvas News): Vishvas News came across a video being shared widely on social media platforms. In the video bikes could be seen skidding on a flyover and people falling off their bikes. It is being claimed that the incident happened in Sanpada, in Navi Mumbai. Vishvas News however in its investigation found out that the video is from Karachi, Pakistan.

Vishvas News came across a video being shared on social media platforms including YouTube.

We also found the video uploaded on YouTube with the same claim.

Vishvas News uploaded the video in Invid tool and took numerous screengrabs of the same.

We ran a Google Reverse Image search on the screenshots and checked on the internet.

The report also had the video of the incident.

Vishvas News also found the video uploaded by various Pakistani Twitter handles. One video had the logo of Pakistan Republic on the same.

Vishvas News in the next step of investigation reached out to a Pakistan based journalist, Sagar Sunhindero who works for Dawn News. He told Vishvas News, “The incident seen in the video is from Karachi, the capital of Sindh province of Pakistan. The area is Rashid Minhas Raod, near Gulistan-e-Johar.” He also shared a few pictures of the place with us.

In the last step of investigation we did a social background check of the social media handle that shared the video. The user has 228 followers and joined Twitter in 2015.

Conclusion: Viral video of bikers seen as skidding is not that of Sanpada, Navi Mumbai as claimed but from Karachi, Pakistan.